Could a Battery Electric Truck Work for My Operation? [with David Price] 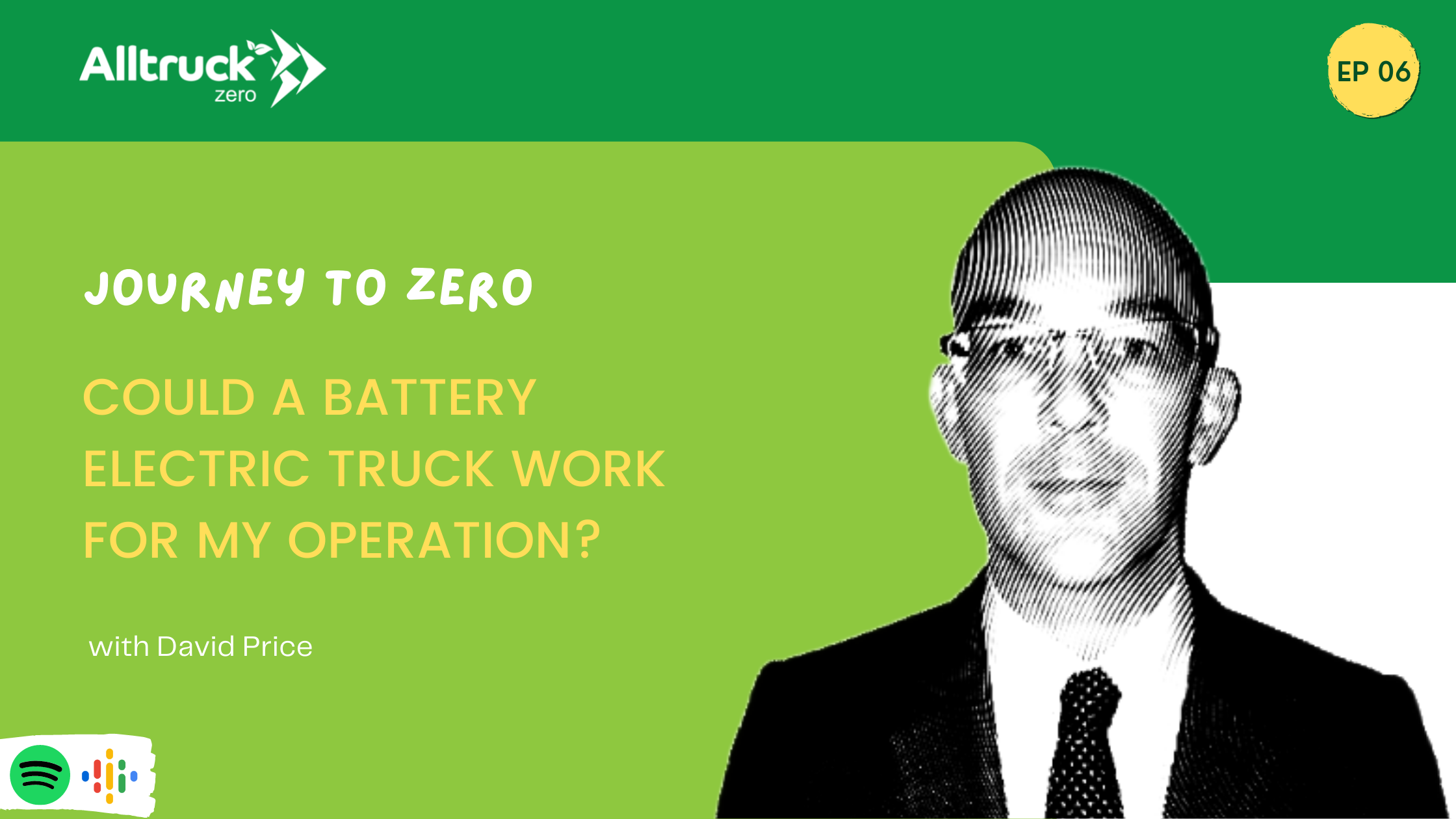 It’s the 6th of December 2021, and amongst a number of exciting things going on in the world today – including Lewis Hamilton’s victory last night, the news that the HGV driver shortage is showing signs of easing, and the fact that Christmas is just weeks away – we hope to add to that with the launch of our second series of the Journey to Zero podcast.

Today, we are kicking off the second season by talking to David Price from DAF trucks, who kindly agreed to join me on the show to talk about DAF’s two new electric trucks – the electric LF and CF – and share his predictions on what we may well be seeing over the next 20 years in transport. 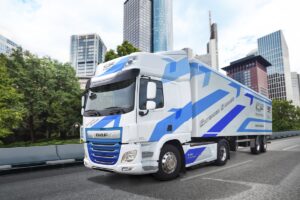 As the technology is still so new for battery-electric trucks, it’s important that those interested in operating them understand the ins and outs of what these trucks are capable of and what operations they suit in order to make the right decision.

To answer some of these questions and queries operators have, I was lucky enough to catch up with David last month over the magical digital waves of Zoom. After my rush of enthusiasm about the new electric DAF LF, which I had the pleasure of being driven around in at the start of September, I managed to regain my cool and we began recording.

You can listen to David’s full episode here:

Don’t have time to listen to the entire recording? Here’s a summary of what David and I were talking about below.

Key takeaways about electric trucks from my chat with David

[01:09] Hannah: Could you please introduce yourself and what it is you do for DAF?

David: Hannah, it’s great to meet you, and thanks for the opportunity to come and talk to you today.

I work at DAF Trucks Head Office based at Haddenham in the UK. My two main responsibilities are working for DAF in the municipal sector and the introduction of electric vehicles to our customer base.

[01:53] H: What first got you interested in working with on the electric side of DAF?

D: I’ve always had an interest in the alternative fuels side of things, including gas vehicles, dual-fuel trucks – which are diesel and gas – and also hybrid systems as well.

So, when the news came out regarding our first electric trucks, I just wanted to take the lead on this. A lot of my customers were also keen to explore this technology

D: The UK Government has made some very broad statements recently regarding the reduction of emissions for passenger cars, and now trucks as well. DAF, along with many other European truck companies, signed a deceleration last December to commit to being fossil-free by 2040. A statement was made about this by ACEA.

In effect, the timelines are very similar between what we as a manufacturing industry are thinking, and the government as well.

The UK government, to give them some credit, is pushing and giving us some deadlines for the industry to work to, which we often need to aspire to and bring in the new technology in a timely manner.

D: Yes, we’ve spent trillions and trillions of pounds and dollars over the years to create an infrastructure around liquid fuels, and now we have to replace that in just over 20 years. It’s nine impossible, but we have to try as hard as we can. 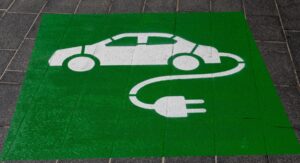 D: We have a number of fuels on our radar: 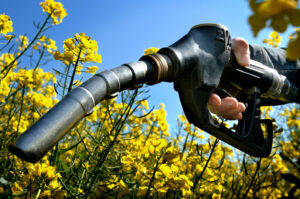 [07:08] H: What alternative trucks do you have available right now?

D: Many are still in development, and different projects are in different states of their trials. The most popular one is the Kenworth hydrogen fuel cell truck in America., which is pulling containers from the port of Los Angeles across to the RDC’s inland. We are seeing some encouraging results from the outcome of that trial.

More recently, we’ve had some publicity in Holland of using hydrogen in the combustion engine.

With this, we need to consider the infrastructure. Where do you get the hydrogen from? How the hydrogen is made? Is it made from sustainable sources? All that sort of thing.

But we do also have our range of electric vehicles at different weights. And we have the HVO element as well. We see HVO as a very promising fuel that is available now that we can use in the transition from combustion engines to alternatives.

HVO is becoming more competitive, and the price difference between HVO and diesel is coming down, particularly if you buy it in bulk.

[10:13] H: Can you tell me more about which DAF models you have chosen to electrify?

D: DAF has been trialing a number of CF electric trucks on the continent for two or three years now with various customers in both distribution and municipal applications. Following the successful trials, we were able to bring these trucks to market from September 2020. At the same time, we were also able to announce a doubling of the range as well from just over 100km to over 200km.

We’ve also now introduced the electric DAF LF. The LF electric is designed and produced here in Leyland, in Lancashire, which is available at 19 tonnes.

D: Due to the lack of a national infrastructure, we have to say that they suit a back to base type operation the most, where the trucks come back to base on a regular interval, whether that be once a shift or once a day.

Also trucks with regular, pre-defined routes, so we know where the trucks, how much energy will be required to get it there, including the energy required to pull they payload. You can then also place fast chargers in key locations on that route.

[17:37] H: Can you explain a bit more about how the charging works for the electric DAFs?

D: For the LF, you have the ability to charge it with an AC charger. This will take around 10 – 12 hours. It can also take a DC charge up to 150Kw, which takes around an hour.

CF is DC charge only, and it does take slightly longer to change. It can take a 250Kw charge.

[21:02] H: What warranty or guaranties come with the trucks and their batteries (i.e. How much confidence do you have in these trucks)?

D: The customers quite rightly, and understandably, have concerns about adapting to this new technology. But the technology we’re using for the trucks has been used for public transport in the far east for quite some time.

Also, the manufactures of the batteries are confident to give guaranties for up to 6, 7 or 8 years. These long warranties give the customers the reassurance that these trucks are back up, supported and have the reliability guaranteed.

[23:10] What will happen with the batteries when they reach end-of-life? Do you have any recycling schemes in place?

D: It’s still early days, but we’re working on a number of alternatives.

There are some ideas which will put some value back into the vehicle itself. If we can take the battery from the truck and move it into stationary energy storage for a second-life then we can reduce the overall cost of ownership.

H: I think it’s really exciting what you’re saying there about taking this ‘old’ battery, which still has plenty of life left in it, and using it as a battery storage for energy. Then potentially using it for charging new electric vehicles or putting electricity into offices, buildings, depots with renewable energy preferably.

[28:40] H: If an operator wants to move their trucks over to electric, what steps should they take?

D: The first question I would ask is what are their motives? Do they want to try the technology before it becomes more commonplace in the market? Or do they want to reduce their carbon footprint?

If they’re looking at it from a financial perspective, the figures won’t stack up for some time to come yet. It will be sometime before the TCO of electric and diesel become comparable.

We then do a feasibility study with a route simulation to make sure the range will work, check their electricity supply to make sure they have enough headroom to support a charger, or a number of chargers.

[32:40] H: If an operator wants to decarbonise their fleet, but isn’t ready to move over to electric – what would you suggest they do?

D: Hydrotreated Vegetable Oil (HVO) is probably one of the most significant alternatives at the moment. It ticks so many boxes. It can save up to 90% greenhouse-gas emissions. It’s biodegradable. It doesn’t have the same aromatics or handling issues that you get with fossil fuel diesel. It can also be incorporated into all of DAF’s truck range without any changes to the truck, and it doesn’t affect the warranty.

[34:54] H: Which technology is PACCAR  (the group that owns DAF) investing in worldwide?

D: We see battery-electric vehicles mainly for urban distribution and short haulage, back to base type operations. We see hydrogen fuel cell electric vehicles on the roads and biofuels in an internal combustion engine (ICE) and hydrogen as a gas in an ICE, too.

There’s even talk of what we call power-to-liquid fuels, which is a synthetic fuel made by capturing CO2 and mixing it with hydrogen to create a liquid fuel. There’s a variety of solutions that we have available to us.

Hydrogen is not going to be the silver bullet that a lot of people think it is, but it will play a part in a portfolio of fuels that we as an industry will be using.

D: The more we can talk to people and spread the message and make people aware of what’s happening, then the better.

For more information about DAF’s battery-electric trucks, or electric trucks in general, please feel free to contact Alltruck Zero on zero@alltruckplc.co.uk, or take a look at DAF’s website here: daf.co.uk

To find out more about alternative fuels, eHighways, tyre wear, and low emission forecourts, you can listen to our other podcast episodes via Spotify, Google Podcasts, or Anchor. Happy listening!