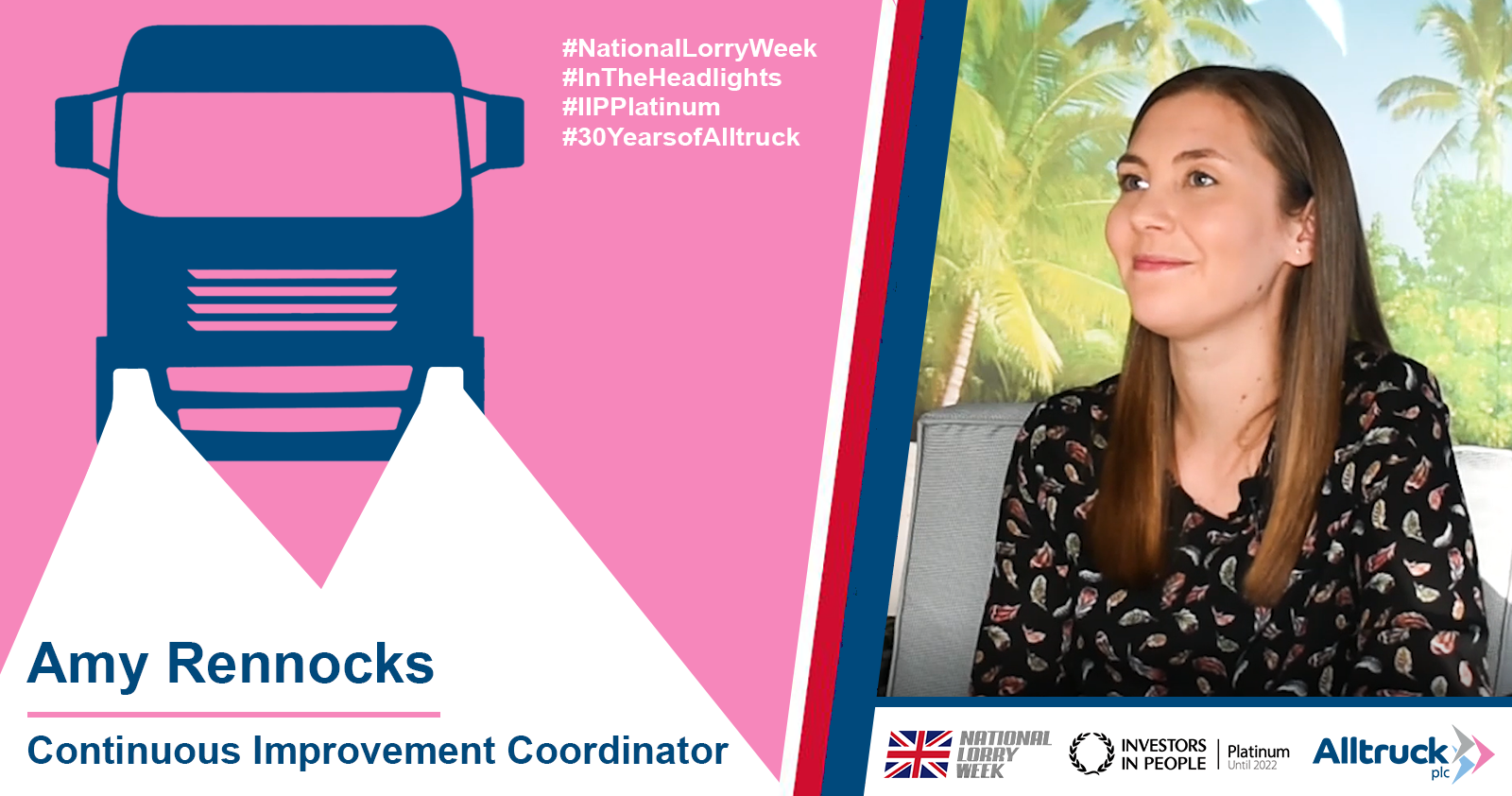 National Lorry Week began on the 16th of November 2020! We have been celebrating the past few weeks by sharing stories from our very own HGV Heroes here at Alltruck plc. To continue celebrating NLW, we will be sharing more videos and blog posts from our Alltruckers.

Amy Rennocks works in the Continuous Improvement Department and has been with Alltruck plc for almost two years now. Amy and the team look after the system that the whole company relies on, solving any problems and constantly making improvements. The CI team also improves processes – making things more efficient, leaner, and helps save money for both Alltruck and the customer.

How long have you been working in the transport industry?

Before Alltruck, I didn’t work in the transport industry and I joined last April, so almost two years ago now.

What drew you to the transport industry?

The industry I worked in before this was quite an unstable one, so I was looking for something that was growing, fast-paced, exciting, and importantly – a stable industry. That’s how I entered the world of transport.

What roles have you had previously?

In terms of Alltruck, I started when I joined the company as a Rental Administrator. From that, I grew, learned more about the business and decided I wanted to get involved in trying to make things better and improve processes.

Outside of this industry, I worked in travel. My jobs were focused on trip and itinerary planning, contracting, and supplier negotiation. Not too dissimilar, but just in a totally different industry.

What are your thoughts on the industry?

For me, I had no idea how complex it was. I think it’s such a vast operation to operate a fleet of vehicles around the country. There’s so much more to it than maybe meets the eye.

It’s so fast-paced and so demanding and growing. You must be very flexible, especially now more than ever, things change on a daily basis.

So, my thoughts on transport are that it’s so vast and so exciting.

What’s one thing about the industry you wish people who aren’t in it knew about?

I think this also relates to me before I joined the industry. I think it’s the sheer complexity and the legislation that runs behind a fleet of vehicles, so the fact that the vehicles need inspecting every few weeks.

The safety of the vehicles is so important and I don’t think people realise the importance of the compliancy team and how hard they work to make sure those vehicles are safe and on the road.

What’s the biggest challenge that the industry faces today?

I think you’ve got the problems that have always been there. Well, not problems as such, but considerations. So environmental impacts, and for those who operate in the EU, it’s leaving the European Union.

But we can’t not mention the fact of Covid-19. That is the biggest challenge that we all face at the moment. For us, in particular, it’s meeting those fluctuating demands. We’ve got customers with a loss of vehicles, so they don’t need their vehicles, but you’ve also got customers who’ve had a huge increase and want more vehicles. It’s trying to balance the customers’ needs in these unprecedented times that we can’t plan for or forecast.

How can we make transport a more desirable industry for recruits?

For me, it would be letting people know of the vast opportunities that surround transport, it’s not just technicians or drivers. They might be the people that you meet on the surface of it all, but there are lots of people underneath that as well.

You’ve got accounts teams, you’ve got marketing, continuous improvement, training, and sales. Appealing to people who’ve got transferable skills in lots of different industries, it’s making them aware that transport can open up all of those opportunities, too.

Do you think there are enough women in the industry?

I think we should be talking more about the amazing women we have here at Alltruck and lots of other transport companies around us.

What makes you proud to be in the industry?

It’s being part of our customers’ journeys, especially the independent and small companies.

Knowing that you’ve facilitated that journey, so whether that’s getting their products from A to B or helping to get the company get started, or getting them the stock they need. It’s so great to be part of that.

There’s nothing better than spotting one of our vehicles on the motorway and you know what work that’s gone into getting that vehicle on the road. That makes me quite proud.